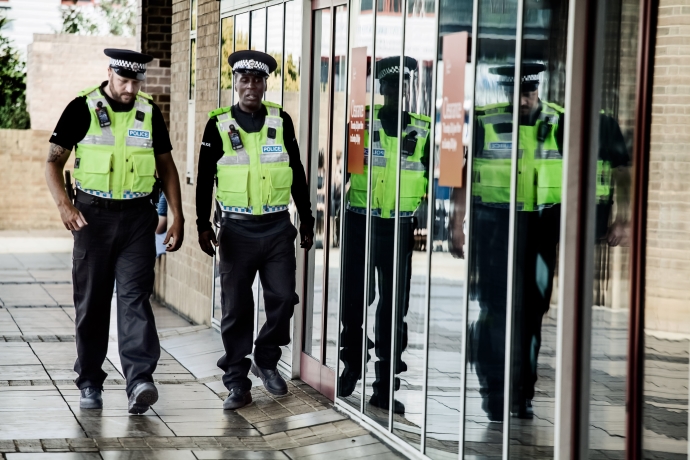 Hampshire Constabulary featured on the BBC’s Panorama episode on domestic violence last night, focusing on how Reveal body cameras have been used in the fight against the abhorrent crime.

1 in 10 prosecutions in the UK now involve domestic violence. Even so, there is still an unacceptably low prosecution rate for this common atrocity, which Home Secretary Theresa May has labelled “an appalling crime”. One of the ways that police forces up and down the country are tackling this issue, is by equipping front line officers with body worn cameras which enable officers to build cases against criminals, without needing the victim to push for prosecution.

PC Matthew Rumsey of Hampshire Constabulary was seen in the Panorama episode wearing a Reveal RS2-X2 body camera. He said that Reveal cameras are “a fantastic way of capturing incidents and showing on occasions the seriousness, sometimes the confusion of an incident”.

Footage from the high-definition cameras was also aired as part of the episode and showed real video from an incident recorded on the Isle of Wight. In the footage a domestic violence victim was seen to be too afraid to push for prosecution by giving a statement. Eventually she was persuaded by the police to give a statement, however the footage from the Reveal body worn video cameras had been enough to convince any jury that the criminal should be convicted for his actions.

The footage from the cameras aired on the BBC program was also a testament to the insight of design and quality of Reveal products. The fully articulated camera head allowed the officers to make sure that the high definition camera, which recorded fine details in a low light environment, was always pointing in the right direction. This enabled the police to capture the victim’s injuries accurately.Additionally, the sound recorded the quiet comments from the victim, as well as the brashness of the criminal and the officer’s attempts to arrest the man.

The front facing screen featured on all Reveal body cameras was also seen to be on during the program, which enhances the deterring nature of body worn cameras by visually demonstrating that the subject’s actions are being recorded.

To find out more about how our body cameras work around the world, and how they could work for you, contact us today