Operation Hyperion is “showing results which seem to be quite promising” 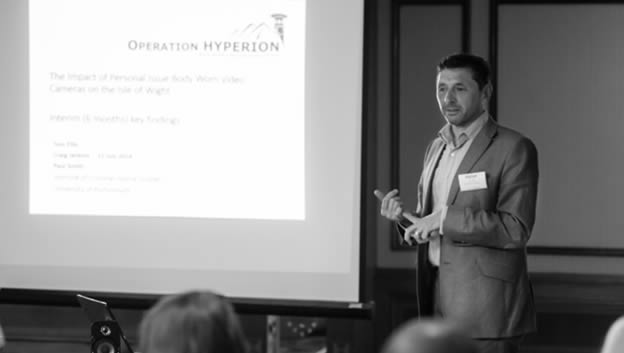 The BWVSG saw Tom Ellis, a researcher at the University of Portsmouth, speak on the interim results from a yearlong project that has seen every frontline officer on the Isle of Wight equipped with a Reveal body camera.

The evaluation of personal issue body cameras on the Isle of Wight “suggests it has not only cut crime but also reduced the number of complaints against officers.” Said Police Oracle.

“The academics have compared data from the Isle of Wight under Operation Hyperion. Each officer carried personal issue cameras for 12 months while officers in the rest of force area, who have less of the kit at their disposal, used the devices on a pooled basis.

“The interim findings show a drop in crime on the Isle of Wight of 11.9 per cent in the period against a 7.4 per cent fall in the rest of Hampshire.”

Tom Ellis said of the interim results: “One interpretation of that might be that it is the introduction of the body worn video cameras might have made a difference.

“I’m not saying it’s a magic bullet but it does seem to be showing results which seem to be quite promising.”
The data also revealed that there had been a 13% reduction in complaints against the police on the Isle of Wight, compared to a 13% increase in Portsmouth.

The full results of the study should be available in October.

Dr Barak Ariel from the University of Cambridge’s Institute of Criminology was also a speaker at the BWVSG. He clarified that the evaluations and tests that were being conducted by himself and other researchers was not to see whether body worn video works, because it has already been shown to.

“I no longer think it is a question of whether we should use it or not”, he concluded, “but how do we do it?”